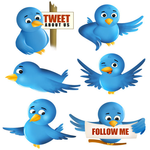 1. Attraction: What will initially attract followers are your tweets.So go post at least 5 to 10 updates before you go following anyone.We don’t want your new followers turning up to a blank page!Interestingly you will still get followers if your page is blank but they are probably the kinda followers you want to steer clear of.

2. Credibility: Sorry guys a picture of your pet gold fish and a name like MLM2009 just isn’t going to cut the mustard. You’re out there to socialize, so treat it like you would any offline’ social arena. When you go to a party, you don’t put a paper bag over your head and introduce yourself as MLM2009. I think you get my drift..

3. Relationships: As with the party scenario, if someone wanted to get to know you and asked what you do, you wouldn’t say ‘MLM expert’ or you would sound like a moron! You also wouldn’t answer with a blank stare. So the same thing applies to your bio. Fill it in and make it interesting.

3. Your Opportunity: Come on guys, sheesh EVERYONE including you hates spam. So why the heck would you go out onto a social networking site and spam it with your opportunity all day long. Do you really think people are sitting there just hoping that someone finally spams them with a good business opportunity!

4. Contribution: Unless your name is Paris Hilton or Barak Obama, people aren’t really that interested in the fact that you just made a piece of toast. Don’t get me wrong, if you really did just eat something fascinating or want to mention the restaurant you ate at, then that could be valuable content. Otherwise, leave the mundane activities out of your tweets and save those for when you want to direct message your friends. As far as what is considered ‘valuable’ to your followers, useful and interesting links are what’s hot.

5.Power Through Association:I got this tip from Guy Kawasaki.I’m going to call it the @guru tip!Send @ messages to the social media big dogs.These are the folks with a large number of followers and seem to be the opinion leaders (and perhaps even heros ) of Twitter.They probably won‘t answer you but that‘s ok.The aim is to appear‘ like you have a relationship with them to enhance your credibility.The theory is if she is tweeting @MrBigDog, she must be worth following .It‘s not who you know, it‘s who appears‘ to know you.Apparently! (BTW, when I sent a tweet to Guy Kawasaki, he replied! LOL)

6. Protected updates: Unless your pic suddenly showed up on the ‘Worlds most Wanted list or you’re hiding from the KGB, don’t activate this function.Come on, you’re not that special are you!

7. Etiquette:The greatest compliment you can pay anyone on Twitter is to RT (re-tweet) their Tweet.Do this when you have genuinely found someone‘s Tweet interesting, funny or valuable, not just because everyone else is re-tweeting.

8. Bankruptcy: Until you reach 2000 followers, don‘t go following more than about 100 people a day.Twitter changes the rules regularly so you don‘t want to trigger a ‘Mosey along now, this account has been suspended’!

9. The Terminator:This is possibly the most important piece of info you might read if you work for a company.Be careful what you Tweet. Tweeting My boss is so dumb he doesn‘t realize I‘m building my online empire while he‘s paying me to work! might not be the smartest move.Remember the Cisco fiasco where 1 tweet screwed up a potential high paying job: http://ciscofatty.com/

GuyKawasaki Well his name speaks for himself plus I gotta recommend him considering I used his tip!

JoelComm Author of Twitter Power and a Social Media Evangelist

MariSmith Dubbed the Pied Piper of the Online World by Fastcompany. The ‘Queen’ of FaceBook.

PerryBelcher Seriously Bad Ass Marketer (his words) and also known as The ‘King’ of Youtube.

Mashable The hottest Twitter tips news and help around. Plus the best Social Media links online.

AskMrVideo Ask him any question on video production, literally.

20 thoughts on “Useful Tips For Network Marketers On How Not To Become A Total Twitter Twit!”